Battle for the Green Hills

A blisteringly hot day outside so I thought I'd indulge in an indoor activity, and what better than a game using some Portable Wargame variant rules of my own; to wit Swords, Sorcery and Squares (published in Bob Cordery's PW Compendium).
A simple pitched battle was set up with an army of men commanded by Count Enarriere faced by an invading army of Darkness led by Lord Nul (a Lord of Chaos).
General/Hero The Count 6SP
His Wizard, Fiddlestix, 2SP
Knights of the Green Shield 4SP
3 units of Men at Arms 4SP each
Archers 3SP
Levy 3SP
Total 30SP Exhaustion Point 15SP
General/Hero Lord Nul 6SP
His Wizard, Gargolous 2SP
Wolf Riders 3SP
Troll 5SP
Orc Archers 3SP
Dead Warriors 4SP
Orcs 4SP
Goblins 3SP
Total 30SP Exhaustion Point 15SP
Both Wizards had the potential use of 3 spells. Fiddlestix armed with Lightning Strike, Shield and Banish Undead; Gargolous with Fire Ball, Fear and Raise the Dead.

Intense fighting on the left flank involving the cavalry and in the centre saw the Army of Darkness suffering the heaviest losses, however they were yet to commit either the Troll or Lord Nul and his Dead Warriors.

On the flank, and unrecorded, the Knights of the Green Shield have defeated the Wolf Riders and attack the Troll.


At the start of Turn 15 (last permitted turn) the two Wizards simultaneously blasted each other with Lightning and Fire; both perished!!
For today at least, Lord Nul has been defeated and retreats to his realm on one of the Planes of Chaos. The remaining Orcs and the Troll lumber off into the night.
The magic use was undertaken with varying success. Fortunately it doesn't always work as the spells can be quite damaging!
at August 13, 2022 14 comments:

The War of the Aragon Succession - a mini-campaign

The setting is as follows - The King of Aragon has died leaving two potential candidates for his throne. The preferred candidate for the nobility of Aragon is the dashing Prince Carlos, soldier, duelist and all round good huevo. The other candidate, Prince Alfonso, is related to the King of Francia, and is definitely from the very shallow end of the gene pool (almost the foot bath). Tensions between the two Kingdoms rise and both mobilize their forces.

Battles were fought using 3x3 PW rules. General's on both sides were instructed to watch attrition rates and withdraw where deemed prudent.
In the first battle, Francia's Army 2 (blue) quickly sent Aragon's Army 4 (yellow) into retreat. They holed up in the nearest town whilst the Francian's camped outside.

In the second battle casualties on both sides were a little higher but again the force from Aragon backed out first. Once the Francian Army had patched up the wounded and collected the troops who had wandered off, the General ordered a pursuit of the enemy!

Despite their reduced size, the two armies fought hard, but once again Francia prevailed. Aragon now had two armies licking their wounds inside city walls. Francia's Army Two was pinning down one of these, whilst their Army Three had withdrawn. This left Army Four fresh and heading for the Capital.

The fourth battle saw Aragon desperate for a victory and fighting with little regard for loss. As the attacking side I deemed it necessary for Yellow to push Blue off his baseline at some point. With the woods on their left flank however Blue stoically held their ground despite great loss. At the end of the day Yellow withdrew his remaining troops. He had damaged the Francian force sufficiently to slow down their march on the Capital, however with 4 straight defeats the War was lost and the Nobles of Aragon sued for peace.
Please note I played a fast campaign with the minimum of record keeping and didn't worry about recording the days / months.
The rules worked well and I can imagine a more structured approach to the system with more time given to battles and records creating a really enjoyable campaign.
I note that since I started typing this Bob has posted changes to the rules!! C'est la guerre.
at August 01, 2022 18 comments:

More pictures of a game using Swords, Sorcery & Squares* (and a report) were sent to me some time ago by Martin Smith. I have posted a selection of the pictures of Martin's very nice 15mm figures, and the report text.
(*the rules were published in Bob Cordery's Portable Wargame Compendium). 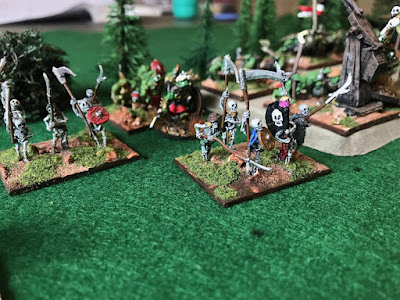 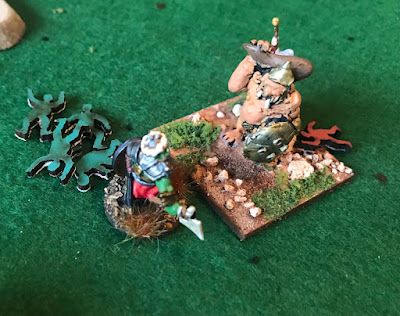 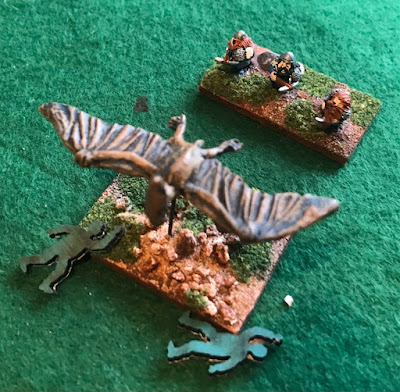 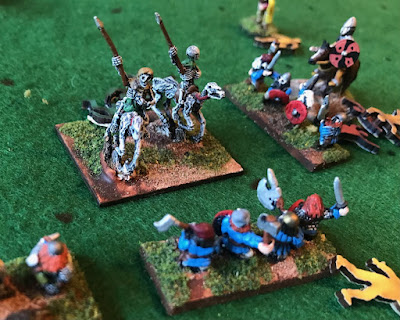 For this, my second try of the fantasy rules, I used scenario #1, Pitched Battle from One Hour Wargames (Neil Thomas). Up until now I’d played 28 of the thirty scenarios but had dodged this one, (something of a head to head crunch), in favour of the more interesting ones. However, this seemed an ideal opportunity to try it out (and cross one more off the list).

Terrain consists of an open battlefield between two hills. The forces involved were:-

‘Good’/Light - an alliance of Men, Elves, Dwarves and a friendly giant (plus commander and a level 2 magician). [total 52 strength points, EP 26]

‘Evil’/Darkness - Orcs, with help from skeletons, a pair of flying beasties (pterosaur-like) and a warband of trolls. Also a commander, Ga-Ruk,  and a Level 1 magic user. [total 48 SPs, EP24].

Randomised deployment led to a tendency for both sides to deploy further west leaving the eastern flanks quite weak, apart from a giant and the trolls.

Battle commenced as the Elves, Men and Dwarves moved off their hill to realign, and then marched forward, while the skeleton masses of the Evil right attacked and the orcish centre left the hill to form a defensive line in front of their war engines.

A significant part of the fighting occurred on the Forces of Light right flank. Their giant and mage advanced against the troll warband, who were rapidly turned to stone by Greytorch, the human magician. The giant then turned inwards on the exposed orcish flank, to be counter-attacked by Ga-Ruk and his bodyguard. The bodyguard were scattered after a long struggle, leaving the giant and Orc commander in a one on one duel, both of them eventually being killed.

Elsewhere flying beasts (pterosaurs) were dropping rocks on men and dwarves, until elvish, human and dwarvish bowmen eventually downed them. The orc war engines were also scoring hits, weakening the dwarven infantry before they met the orcs in combat.

However, despite losing significant casualties it was the forces of Light who brought the Evil army to exhaustion point first. The remaining orcs and skeletons attempted to withdraw towards their artillery, though some were surrounded, fighting hard as they were cut down.

It was declared a victory to the alliance of men, dwarves and elves, but a bloody one, with the allied troops also brought to exhaustion point as they attempted to mop up the enemy.

‘Evil’ - 35 SPs, inc. their commander, three units of orc infantry, one of skeletons and both flying beasts.

(All pictures and text are Copyright Martin Smith.)

I've been play-testing another skirmish rule-set for the 3x3 Portable Wargame and the result is it sort of works, but I need to make a few additions/clarifications.

Here's a few pictures of the fun:

The peasants who toil away for Sir Richard D'Astard-Leigh have revolted against his tyrannical rule. A number of them find him out and about with his Sergeant (lets call him Wilson), and his Reeve (he isn't named, which does not auger well for him).

Mardigan over at the Brush and Battle blog has been compiling inspiration for some medieval buildings made simply from blocks. This reminded me of some bits of architectural scenery I made from one of those wooden villages you can pick up on Ebay. I made them for use with 10mm figures based mainly on 2" square bases. They are themselves assembled on 3" squares to fit on a 3" grid.

A new post has appeared on my One Hour Wargames blog for those interested in such things.

Martin Smith has very kindly sent me some pictures of his recent game using my Swords, Sorcery & Squares rules (the PW variant that appears in Bob Cordery's Portable Wargame Compendium)! Martin also provided me with loads of feedback which has provided a lot of food for thought.
The game report appears on Facebook so any reader that has access to FB could track it down on either the "15mm War Gaming and Painting" account or the Portable Wargaming account.
Looks like it was a fantastic game Martin.
The following images are Copyright Martin Smith and appear with his permission. 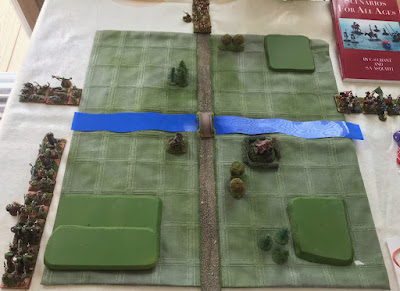 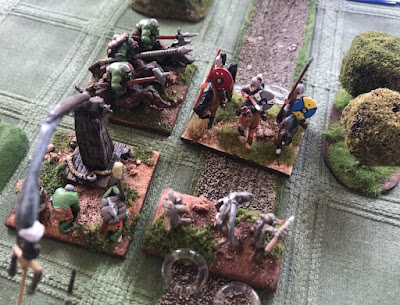 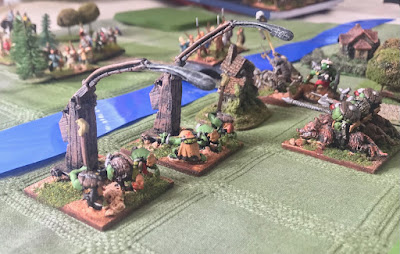 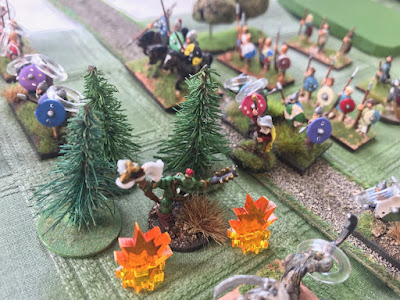 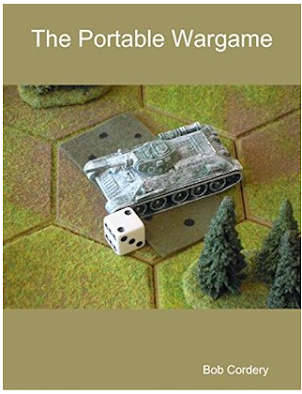