Fish Stew - An All Hallows Special (not for the faint hearted)

This game featured the rules written and used by Sprinks over at the Wronghammer blog (that's a link I hope, though my HTML is not what it was...). I tinkered slightly with the rules, "Blood, Guts and Severed Heads" to allow for one-on-one skirmish fighting, so it's now BGSH Lite. In the spirit of the Sprinks System, figures were left unpainted.

Old Sir Bernard had retired from the Baronning business, moved to the coast and bought himself a nice little Manor he named Dun Slaughterin. He'd hung up his sword, thrown his armour in the shed and was looking forward to spending some quality time with Lady Bernard, sitting by the fire with his feet up on a serf, or some such. Then the messenger arrived.
"The King demands that all knights, old or young, must march North to The Death Lands with as many fighting men as possible, and join him in a mighty final battle against The Evil Personage and his monstrous army of... monsters. Oh, and as you live by the Sea he also demands that you bring a large cauldron of that fabulous fish stew they do around here. Farewell!"
Sir Bernard sighed and went to look for his horse...

Sir Bernard and the Good Men must get the Fish Stew across the board. The Ambushing Goblins and the Troll must stop them. The Troll is hungry (of course) and wants the stew. The Goblins just want to kill as many men as possible. All normal Fantasy fare. 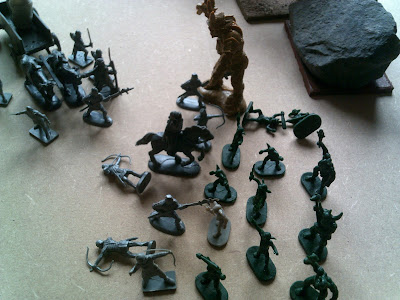 A fun game with plenty of carnage and no serious consulting 200 page rulebooks or very expensive expansions, so therefore a success. Once again my troll was completely ineffective - another game like that and they'll be playing for the reserves.
at October 29, 2017 4 comments:

So we come to the final battle in this little campaign (collective sigh of relief).
The remnants of the Lunares' army (Blue) led by their Chief Vindicatus, hurry to the nearest fording point on the Great River after their failure to destroy a third Solarii (Army Red) village. Having rested in the hills overnight they arrive at the ford at dawn only to find the army of Chief Divios, who have marched through the night, have arrived already.
Rules, as before, are Bob Cordery's The Portable Wargame, using variations shown in Part 1. Objectives; Blue must get 50% of his army across the ford in 15 turns. Red needs to stop this happening. If Blue reaches Exhaustion Point before thet get 50% across they can still keeping moving towards the ford but can only defend and not attack Red units. 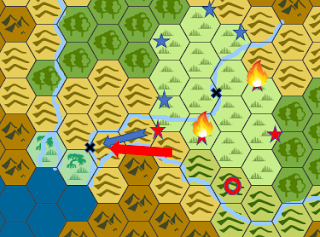 Game 5 - Taken at the Flood

The Solarii had a slight numerical advantage but were fatigued after their long march so things were pretty evenly matched as the two armies lined up.

The Lunares' were just able to get more than 50% of their force across the ford after 15 turns and so won the day. Overall they failed to destroy 3 villages but with the death of their Chief the Solarii were not going to look for revenge (not for a while anyway).

Although the 2mm units are not attractive, they  are truly portable and quick to set-up and work well with fast play rules.

Having joined his two forces, Vindicatus proceeded in a barbarous fashion to his final target. His plan was to quickly destroy the enemy force, torch the village and make a dash for the river crossing before Divios could bring his army down on the Lunares.

The Headman of this village had wisely built on a hill and was clearly of a defensive mind-set. No fancy flanking moves here thank you. The Lunares (Army Blue) were forced to attack a fortified position uphill and despite their numerical advantage it was going to be a challenge.

The end of Turn 15 came and Vindicatus had failed to take the village. With his scouts reporting that a large Solarii force was only a few hours away, the Lunares raised the siege and made a run for it.

Next time - Flight to the ford (apologies to the Tolkien family)

Vindicatus himself led the Southern prong of the Lunares' invasion South. Two more villages stood between him and the next fording point across the Great River and he was aware that it was only a matter of time before word of their incursion reached Divios, Chief of the Solarii. 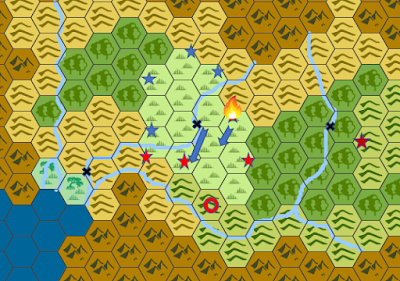 The Solarii defence was really a re-run of Game 2; leave some units in the village whilst trying to outflank the attackers. Again they held on to the last, despite reaching Exhaustion Point (50% casualties) by the end of Turn 6 of 15, meaning they could only defend.

The surviving Solarii Cavalry were able to escape the field and rode South to the Hillfort of Chief Divios to raise the alarm. Vindicatus moved West to meet up with the remnants of the army featured in Game 2 and attack the third village. 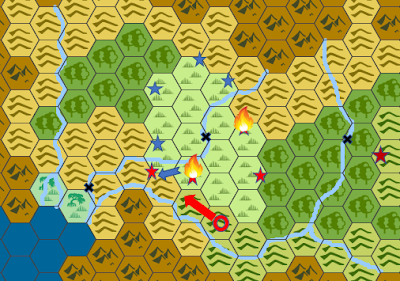 These are the same as the last post except; the game will last 15 turns; all units suffer -1 to combat or firing rolls when attacking the palisaded village; attacking an unoccupied grid square of the village requires a roll of 6 to break through.

In response to the failed attack of his enemy, Vindicatus, Chief of the Lunares, threw his entire army at the Solarii. Having crossed the Great River he split his force in two; one force was to move East, the other South. His aim was to destroy three villages, hoping to break the will of the Solarii people, and deter further invasion. 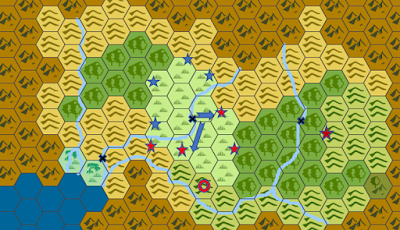 The Eastward moving force approaches the nearest village; their objective is to be in control of the village by the end of Turn 15 so that they can destroy it and then move South to join the rest of the Lunares' army. The Lunares (army blue) have a slightly larger force, however the Solarii (army red) have a defensive advantage in the palisaded village.
Red kept their mounted units and a Warband outside the village hoping to outflank Blue
This plan was not a success and by Turn 6 Red had lost all of his mounted troops and was nearly at Exhaustion Point (at which he could only defend his current position).
By Turn 8 the battle had turned into a siege as Red's last troops outside the village fell.
For several turns the defences held and it looked like Blue would fail, but at turn 11 a cavalry unit broke into the rear of the village
and were promptly driven out again
however Army Blue was now piling into the village and by the end of turn 15 they had a commanding position. The remaining defenders were down to 3 SP and the village had begun to burn. 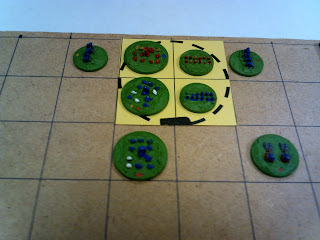 The rules used are Portable Wargame Rules: Ancients. The following table shows the qualities I use for the different unit types in the campaign that I have set in an imaginary Late Bronze/Early Iron Age world. The units are 2mm blocks with coloured dots to distinguish them. These were originally used with my Prehistory variant of Neil Thomas’s One Hour Wargames rules (available on request). There are no separate Generals on the field as I’m assuming that the commander is with one of the Warbands. Exhaustion Point is set at 50% SP, and the Game Length at 10 turns. 2mm blocks are really just a step away from boardgame counters or Kreigspiel blocks but I find them to be quite engaging (even my poorly painted ones) and they do make for a truly portable wargame. The board was an offcut of 6mm thick mdf I found at work that just cried out to be used. A single game of this scale can easily be set up and played in a lunch break, a bonus to the gamer who is short of available playing time and space! 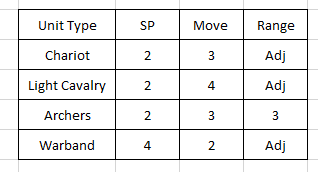