Albionia's colony on the Uqbal sub-continent is bordered to the North by a wilderness of hills and deserts that are inhabited by fiercely independent tribesmen. To the East is the Kingdom of Uqbalistan, formerly a useful puppet state and ally, but recently, under the new King, becoming a potential problem. The small Army of Uqbalistan had been trained and equipped by Albionia and was a handy tool in the fight against slave-traders and troublesome desert tribesmen. The new King has raised many conscript regiments, arming them with old muskets, and spies report tribes from the hills and deserts are in his pay.   In a recent dispatch to the Motherland, the Governor of Albionian Uqbal has warned His Majesty's Government that there is a high probability of conflict with the Kingdom of Uqbalistan.

A force from the Army of Uqbalistan has moved across the border and is currently occupying the last stop of the Trans-Uqbal Railway.

A column of Albionian troops rush to repulse the invaders.


The enemy artillery being killed off by the fine shooting of the Guards battalion, the Uqbali General moved his regular infantry up to the walls, which proved to be the turning point of the battle...

Having reached Exhaustion Point, the Army of Uqbalistan could take no more decisive action and was gradually reduced by long range shooting from the Albionian troops. On the left flank the Caledonian Greys destroyed the dessert tribesmen and threated the enemy rear. The invaders pulled out and retreated back over the border leaving the Albionian Army to await reinforcements and new orders.
This game did not turn out how I expected, due to a lucky shot by a Guardsman that took out the General, which always makes things more interesting! Putting the conscripts with their muskets (50% shorter range than rifles) to the front was a mistake, as two battalions of the rifle-armed regulars didn't even get to move before Exhaustion Point was reached - fortunes of war etc. Until next time, thanks for visiting.

Watchers in the Hills - prelude to battle

More Questing for Brin the Barbarian

Found time for another quick game of Brin the Barbarian (see side bar for the latest version of the rules). In this encounter Brin has been joined in his quest by Auburn Aoife. They are represented here by Minifigs SSX1 The Barbarian and SSX3 Pirate Girl.
A note on pronunciation: Brin rhymes with green and not grin. Aoife is pronounced EE-fah.

Brin and Aoife have wandered into a land known as The Petty Kingdom. This dismal country, all that's left of a once prosperous Empire that tore itself apart in uncivil war, is ruled over by a creature of infinite malice and evil, The Great Toad. The Toad lurks in the centre of a swampy area called the Gripping Mire, surrounded by his rabid, sycophantic supporters. The countryside surrounding the Mire is an impoverished land where the common folk strive beneath the yoke of the malevolent Toad and his foam-mouthed followers, and outsiders are at best tolerated, until their money runs out, or more likely meet a grisly end. 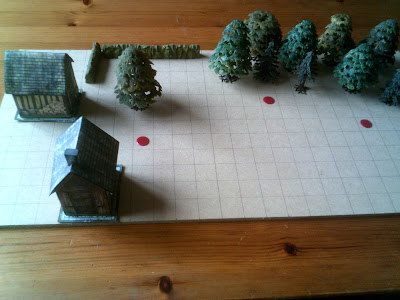 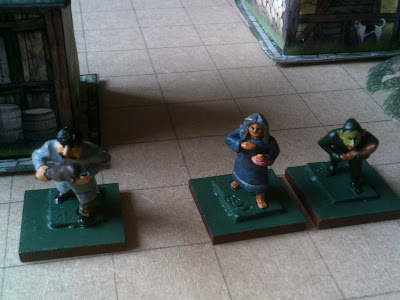 The local Witch, Barking Mad Annie of Widdicombe, an acolyte of the Great Toad, and her henchmen block the entrance to the village. Mad Annie is played by Minifigs SS11 Witch of the Mists. On the left is Steve, a Xenophobic thug (Minifigs SS61 Ogre) and on the right is Gover, a back-sliding slimy thing of dubious origin (Minifigs SS49 Gargoyle) who looks like a proto Teletubby
The resulting battle was touch and go for our Heroes. Regrettably it got too dark to take any more pictures, however I can report that Mad Annie fled to the swamp and Brin and Aoife overcame their foes and left the Petty Kingdom with nothing to show for their exploits other than some new scars.