Frivolity and a Recommendation

Whilst rooting around in the piles of stuff I call my Toybox I chanced upon this old model steam launch I'd made years ago. So I took a frivolous picture of it. I call her The Heart of Darkness:
On a less frivolous note, I recommend you visit the following blog ( click HERE ) which is being penned by Johnny Danger. Mr. Danger is undertaking an ECW Campaign in 6mm using The Portable Wargame, and jolly good it is too.
at July 29, 2020 8 comments:

Further to my post on creating inexpensive armies for One Hour Wargames; Herr Zinnling was very complimentary about the 10mm figures so following is a short explanation of the raison d'etre behind their composition.
In Chapter 20 of One Hour Wargames, Neil Thomas put some tables to randomly create armies (very useful for the Solo Wargamer); so for the Fantasy Armies I was making in 10mm I purchased sufficient figures to accommodate the possible variations in a similar table.
Infantry/Archer units were to be 2 figures and Cavalry 1 figure; So I needed 10 Infantry, 4 Cavalry, 4 Archers and a Commander (my rules included a Commander who fought as an independent unit and was required for each Army whatever its composition).  The figures were purchased from Irregular Miniatures who sell them individually at £0.22 for foot and £0.44 for mounted figures - so these little Armies cost a few Pounds Sterling each, plus a slapdash (schludrig) bit of painting!
So here is the original Elf Army in total 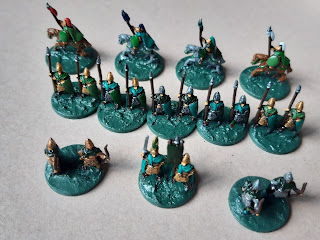 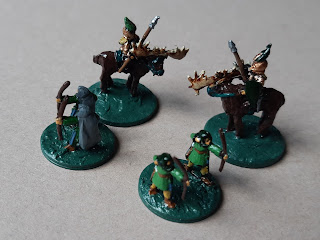 Whilst in an ACW mode I had a go at a scenario I haven't tried before, number 22 in Grant & Asquith (Scenarios for all Ages). 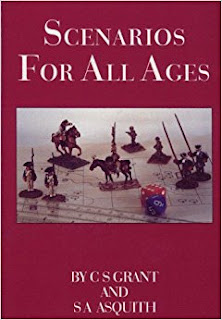 Setting the Scene
Colonel Zebediah Protheroe and his brigade of Missouri Bushwhackers have been harrying General Wise's Union Army of The Potonail throughout the Spring. Finally, the General has managed to corner Old Zeb in a wild part of Featherstone County and has a chance to remove the thorn in his side on a permanent basis. Unfortunately, the General blunders in his choice of officer to undertake the coup de grace, and sends the hapless Colonel Brandon (not the dashing hero of Jane Austen's Sense & Sensibility but a fellow from a much weaker branch of the Brandon family tree, more of a twig really).
Colonel Brandon is lost. Finding a road (it must lead somewhere) he orders his brigade to start marching. They become spread out...
The Bushwhackers have bivouacked on the edge of the road just before it plunges into a wood; Colonel Protheroe has sent his cavalry to forage for food / boots / booze etc
The game begins as the two forces encounter each other. In Turn 1 artillery cannot fire as the guns are not ready. The objective of the Union side is to get at least 50% of their force off the board by the road through the woods, or eliminate the Confederate commander. The CSA objective is to stop the Union force escaping. Game length is 15 turns or when both sides reach Exhaustion Point.
The Game
The sun goes down. The Bushwhackers melt into the woods and the remains of the Union force must look for a way to rejoin the main Army.
at July 18, 2020 18 comments:

Bridgehead (on my OHW blog)

If you feel inclined, please follow the link... HERE 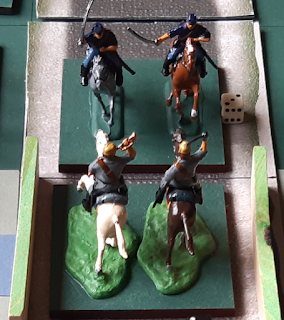 An Age Undreamed of (Part the first)

Back in April (where did those 3 months go?) I wrote a post regarding my youthful dreams of running a Campaign in Hyboria (see HERE) in the grand manner of Tony Bath. Although this seems unlikely, a few games in Hyboria are well within my abilities!
I'm currently tinkering with my Fantasy variant of the Portable Wargame so I ran a small game with them this morning. As is customary, the backstory to my game is probably more interesting than the game itself.
Background to the game
A wandering tribe from Brythunia has strayed into the hill country in the North East of Corinthia. Citizen-Soldiers from the local town march out to stop the invaders crossing the hills and invading their valley. The action takes place near the ruined Temple to the Fireflies, and a goat farm belonging to a man called Hook (apparently an old seafaring man...) 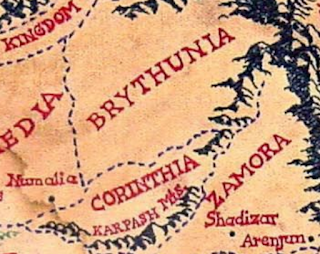 Game
This scenario is better suited to a bigger playing area and more mobile forces I think. Suffice it to say, when the two armies met, a static meat grinder ensued as both armies tried to break a hole in the others ranks.. 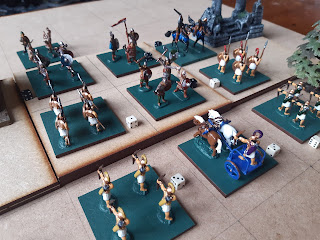 The battle ended with two battered, exhausted armies leaning on each other! The Corinthians had stopped the invaders but only just. They'll probably be back. I finish with an excerpt from The Nemedian Chronicles (copyright R E Howard estate) 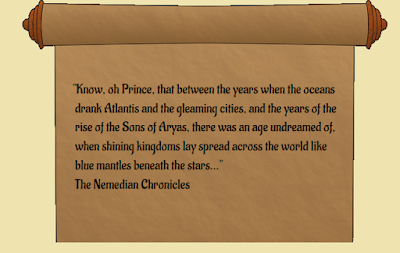 Being merely a gratuitous plug of the latest post on my OHW blog...
https://btohw.blogspot.com/2020/07/scenario-4-take-high-ground.html 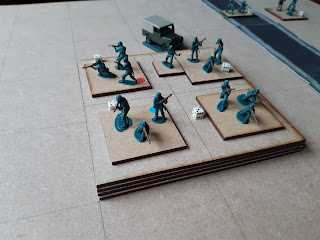 The Impecunious (One Hour) Wargamer

At the risk of sounding like Neil from The Young Ones, and bringing my reader down, I'm just briefly going to talk about how I did/do/will do(?) Wargames on the cheap, when the need arouse.
Back in the last recession (to distinguish it from, I'm sorry to say, the one that's just starting) I had to work away from home so had no access to my Wargaming stuff. To while away the evenings I started making paper board games and pushing cardboard armies around on them. Then in 2014 (I think) I picked up a copy of One Hour Wargames and started making A4 gridded versions of the scenarios (space was limited!). The games were played using gridded versions of the published rules, numbered plastic counters (tiddlywinks) and then later with 2mm blocks from Irregular Miniatures. These little games were a really sanity-saver and were obviously very inexpensive to set up.
After the 2mm blocks, I purchased some very small 10mm armies. They were still inexpensive but looked a bit more like wargame figures. To keep the cost down I used 2 Infantry figures or 1 cavalry figure to represent a unit. Not to everyone's taste, but needs must!
In recent years I've been splashing out money on 28mm figures etc but I'm still very attached to my cheap little 10mm fellows and they get the occasional game. This weekend I've been using them to tweak my Fantasy variant of the Portable Wargame and have fought (a couple of times) the next Scenario in One Hour Wargames (see HERE).
Stay healthy and safe!
at July 05, 2020 17 comments: