Adventure 4 – The Manse of the Mountain King 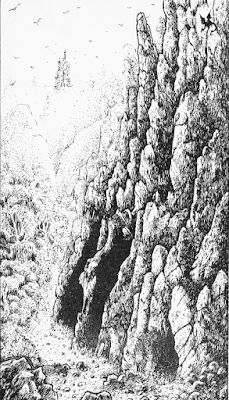 (illustration by John Blanche)
﻿
﻿
Emerging from the dense forest, Krud and Ildore find themselves at the foot of a long range of mountains. Directly in front of them is the entrance to a steep pass leading serendipitously to their goal, a ruined castle known as the Manse of the Mountain King.
“Damned good shortcut, eh?” enthuses Krud.
“Fantastic” replies the Hedge Wizard, pulling twigs and leaves from his beard. “Shall we get on with it?”
“Indeed, by the Gods! Onward to riches and glory!” the young warrior cries.
“Onward to Goblins, more like…” mutters Ildore.
Having climbed the precipitous trail, the adventurers peer through a ruined gateway into the shell of a squarish castle with a tower in the North-East corner. 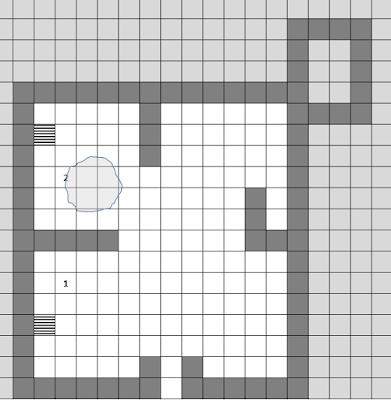 ﻿
What was once, presumably, a courtyard and internal buildings is now an expanse of crumbling walls and rubble. They cautiously enter…
1.       The inevitable band of Goblins are sitting by a fire eating what may (or may not) prove to be a roast Halfling. Krud attacks at once; Ildore grips his dagger and takes a defensive stance behind a large pile of rubble. Two Goblins fall to Krud’s sword immediately; three of the others put the fire between them and the warrior. The last makes a run for it, straight into Ildore’s dagger. Krud leaps the fire and wipes out the remaining Goblins. A set of stairs leads down into the Castle’s Dungeons (?) but Krud wants to continue searching above ground first…
2.        “Great” quips the Hedge Wizard, “A large stagnant pool. Bound to be stuffed with treasure...” “Hmmff” his companion grunts, “Let’s see what’s down those stairs…”
As our heroes pass the pool two quite large Vampire Frogs leap out croaking hungrily. A fight ensues. The amphibians lose. Krud swirls the cloudy water with his sword but can see nothing. Neither fancy taking a dip. “To the dungeons!” cries the over-eager Warrior and they descend... 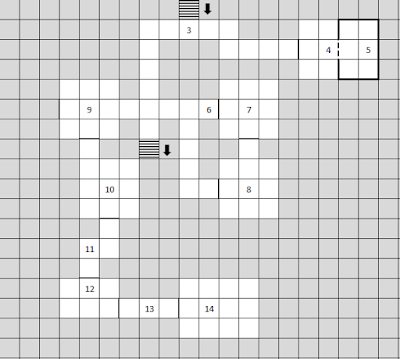 3.       At the bottom of the stairs a passageway runs left or right. Turning left they move along another passageway that ends in a door…
4.       Krud listens at the door but hears nothing. He enters and finds a small apparently empty room. “Let’s search, there’s bound to be a hidden doorway to treasure” says Krud. Ildore stands back, suspecting there’ll just be a trap. Amazingly (2 lucky dice rolls later) there is a secret doorway to…
5.       A similar room that contains a mouldering chest. “Ah-ha!” cries the Warrior. The chest falls apart as Krud touches it but in the remains is a roll of vellum that contains an Escape spell. Ildore is impressed; Krud is not. They retrace their steps to…
6.       Find themselves at a cross-passage. Turning left they approach another door. Krud listens; a spectral figure floats through both the door and our heroes. Ildore is obviously affected but Krud ignores the ghost and opens the door and enters...
7.       A room in which 4 Hobgoblins are lounging around waiting for unsuspecting adventurers. There is a fight. Despite Ildore’s ineptitude the Hobgoblins are slain. Krud relieves one of the fallen of a gemstone. Exiting via another door they move South to…
8.       A room containing two trolls; they are aware of the approaching twain due to the noise of the fight with the Hobgoblins. (Note: these are trolls in the mould of those encountered in Tolkien’s “The Hobbit”. They are called Bert and Ernie).  Ildore sensibly uses a Fireball spell and blows Bert to pieces. Ernie is upset about this and swings his club at the adventurers. Krud parries the blow and attacks the troll. After a short scrap, he defeats Ernie and chops him up just to make sure. 6 Gold coins are found in Bert’s purse. Ildore investigates the purse but it oddly it doesn’t talk. Returning to the cross-passage the explorers move West…
9.       They enter a room with two other exits and 9 vampire bats hanging from the ceiling. The bats depart shunning the light from Ildore’s lantern. Taking the South door, they enter…
10.       A room full of a strange yellow mist. Ildore holds his breath and runs for the opposite door; Krud gets a lungful and chokes. His companion drags him out before the poisonous gas can do too much damage.
11.       In the corridor, they collide with a party of orcs. Eventually the Orcs are overcome. Ildore suffers an injury but is patched up and they move on…
12.   Through another empty room. As they head across it the jaws of an enormous “bear-trap” fly up through the floor. Krud’s quick reactions save them. The Eastern doorway leads to…
13.   A short passageway. More vampire bats fly out. Krud listens at the door at the end of the passage. All is quiet. They enter…
14.   The tomb of the Mountain King. A stone sarcophagus lies on a large slab in the centre of the room. Broken urns and crates line the walls – it appears that the tomb has been defiled in the past. There are also bones and corroded weapons lying about the floor. As they enter there is a rustling noise and a mummified corpse creakingly rises up from its resting place. “Fireball!” yells Krud raising his weapons. Ildore’s final Fireball spell does some damage to the Mummy; he then keeps guard behind the door whilst Krud does what Warriors do best. Soon there is nothing but smouldering bandages and broken old bones. A few coins are found among the wreckage of the King’s burial offerings. In the sarcophagus is a strange wooden staff; Ildore senses magic and keeps hold of it. Disappointed by the lack of more treasure, Krud leads the way out of The Manse of the Mountain King. 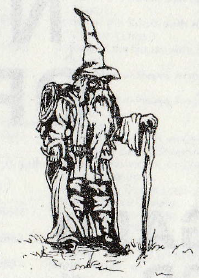 Email ThisBlogThis!Share to TwitterShare to FacebookShare to Pinterest
Labels: 4AD


Due to the full coverage of Le Tour de France on both Eurosport and Channel 4, your humble author has managed to reach new levels of procrastination. In an attempt to atone for this I submit some pictures of a game played some time ago featuring 1/72nd scale cowboys and Indians and fought with my house rules "Mr Featherstone, I presume?", a version of Donald Featherstone's rules for Close Wars for gridded boards. 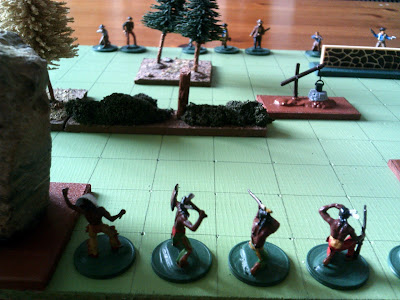 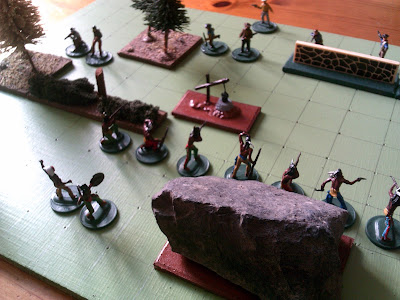 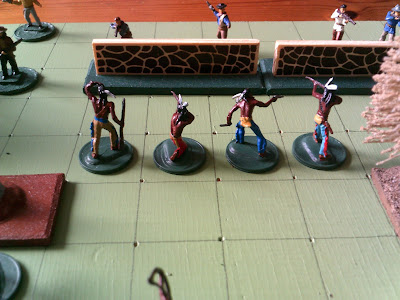 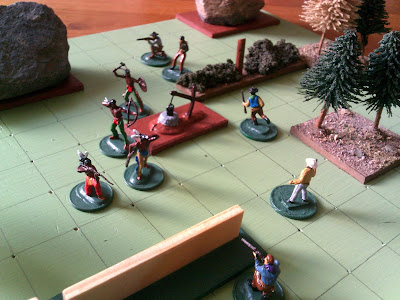 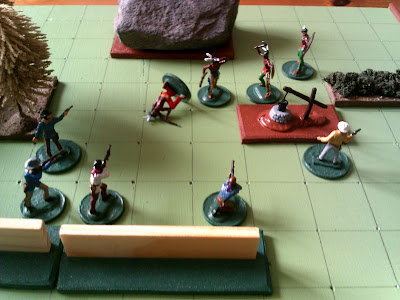 
King Alonso IV of Messaline (a mountainous country East of Illyria) had four sons. The first as heir was trained for Kingship; the second was appointed Archbishop and the third ran the military. But what to do with the awkward fourth son? The King did not want a spare heir to the throne kicking his heals at court, possibly open to the insidious suggestions of plotters. Then one spring a solution presented itself. The Northern province of Vallefelice had a problem with the Undead. What better role for the unemployed Prince Orsino than the long-vacant post of Lich Finder General?


Vallefelice is a narrow valley hemmed in by the high dark mountains known as the Denti del Diavolo. The height of the surrounding peaks means it generally sees only a few hours of real daylight; it is dark and has an oppressive atmosphere, and is cut-off from the outside world during the Winter. Despite it now being the 17th Century, the people of Vallefelice resemble something from the Middle Ages. The population is now living in terror having recently been plagued by ghostly figures and animated corpses who have attacked the unwary. 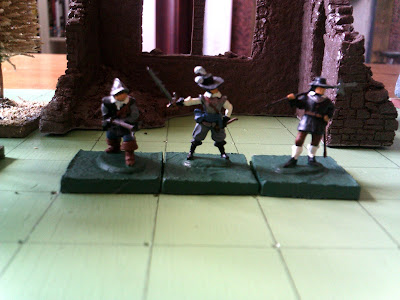 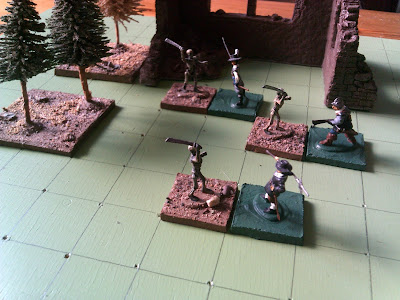 The Team tackling some skeletons and prevailing, huzzah! 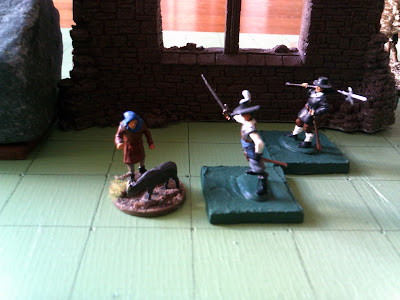 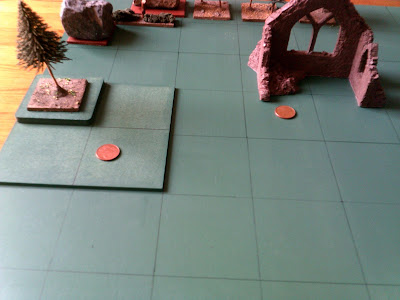 Possible encounters are marked with coins 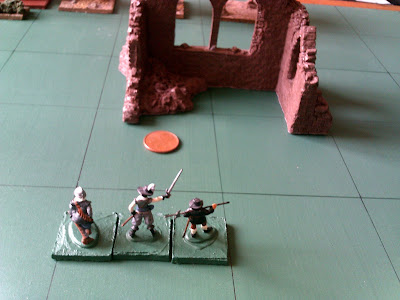 The first appears to be nothing 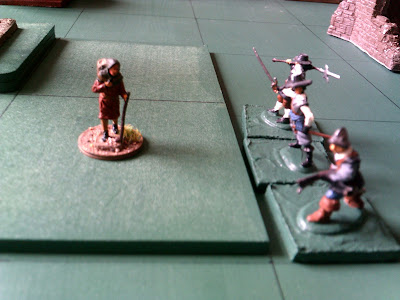 The second is a peasant on his way home 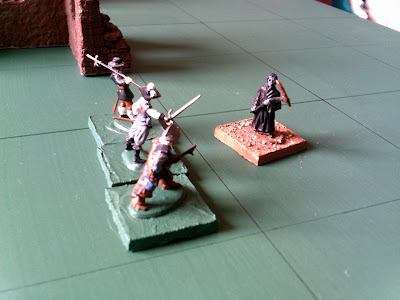 The final encounter is with a wraith. The Prince fights it alone, destroying it but being wounded; end of game.
﻿