Ghosts of Projects Past #3

One month into this year 2021 and nothing really to show for it, though I am slowly clearing a few bits off the painting table, those figures that have been hanging around for months (years?), gathering dust.. As such, I thought I'd unearth something from the past to fill a bit of space on the blog.

I've recently been reading a tome entitled Hawk and Moor. It's a rather entertaining read about the appearance of Dungeons and Dragons (the beast that spawned a thousand RPGs); this reminded me that a while back (2019, remember, a time before the pox...?) I had thrown together, and was experimenting with, a little skirmish game using the D&D combat method. Gary Gygax, co-creator of D&D, had himself been interested in representing a single figure as one person in tabletop wargames and had featured such combat in Chainmail, the medieval rules co-authored with Jeff Perren. I wanted something a bit simpler that could be on just a single page. Gygax et al had played their medieval games using Elastolin figures, so my first try was with larger figures too. 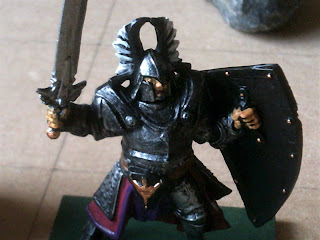 A pair of Russian made (?) "Knights" fought a couple of Orcs (played by Dark Alliance Trolls) in the initial trial. The pics aren't great as it was a bit of a dark day.

One of the ideas I wanted to use was to have character figures (Heros) who would have better statistics than the average chap and who could gain "experience" in an RPG kind of way, improving their performance perhaps... 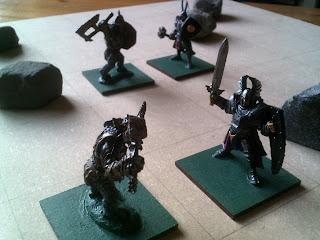 As the rules were based on D&D they do call for multi-sided (funny) dice, though I guess most people have some of these. I called my rules Chainmailesque as I liked the name but it doesn't really reflect the Chainmail rules. The game is on a grid (needless to say) but could easily be played using normal measurements. I never got any further with it than the following. Perhaps I'll have another go at some point... 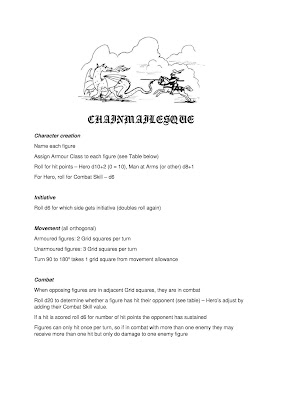 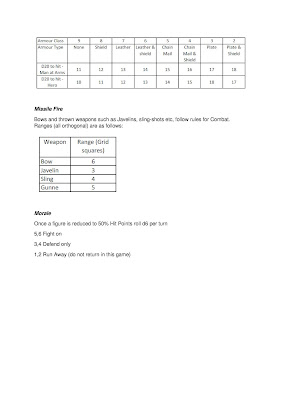 The Illustration was "borrowed" from the 3rd edition of Chainmail that included the Fantasy supplement which in turn led to Dave Arneson and Gary Gygax penning D&D. 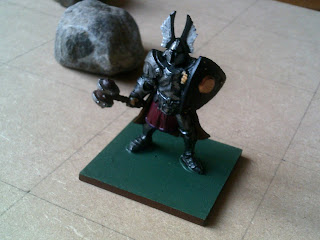 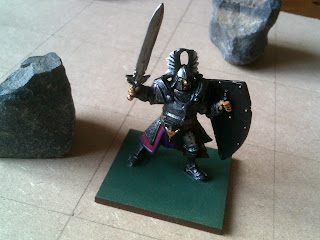 Incidentally, I named these two Keeper Bernard and Keeper Simeon, though I'm not sure what they kept; certainly not the Peace by the look of them.